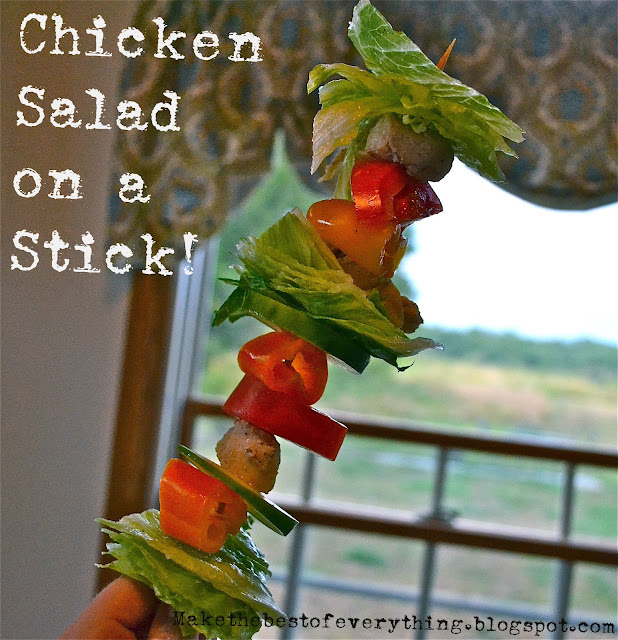 This was a perfectly wonderful light dinner, after a perfectly sinful calorie fest at the Iowa State Fair.  Yesterday, was my first visit ever to the Iowa State fair.  I am a Chicago area native, but since I married an Iowan and I now live in Iowa, I decided it was time to see what it was all about.

Chicken Salad on a Stick was inspired by the ” Salad on a stick” I ate at the fair.  which was basically the only thing that came on a stick that was not battered and deep fat fried!

I decided to make a mock ” Salad on a Stick” because I thought it was such a great idea!!  Just think of the endless possibilities you can make with this concept!  I bet you can put your favorite salad on a stick and present it in a pretty way when you have a get together! 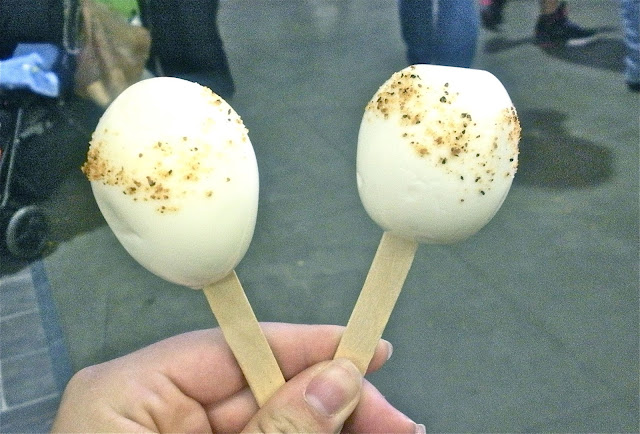 My fair eating day, actually started out somewhat healthy.  My husband and I both ate each a banana on the car ride to Des Moines.  Then, shortly after arriving at the fair,  the Iowa egg council was giving away hard boiled eggs on a stick.  I thought that placing a hard boiled egg on a stick was an interesting  idea.  Fun for a brunch, or breakfast with children.

THEN, I found a ” Salad on a Stick” which was one of the “healthy” things that the Iowa State fair offers.  It came with an Apple balsamic vinaigrette, and it was extremely refreshing.  I generally don’t eat iceberg lettuce, but forgot how crispy and crunchy it can be. 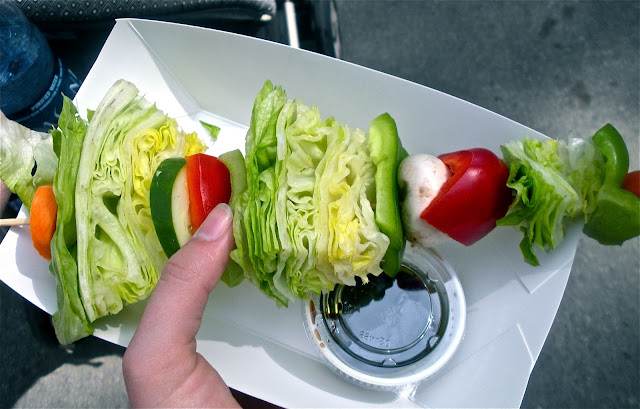 My husband then purchased his sought out item.  A Hot beef Sundae.  Which is a sundae that consists of mashed potatoes topped with hot beef, cheese and a cherry tomato.  This was one of the most popular items at the fair. 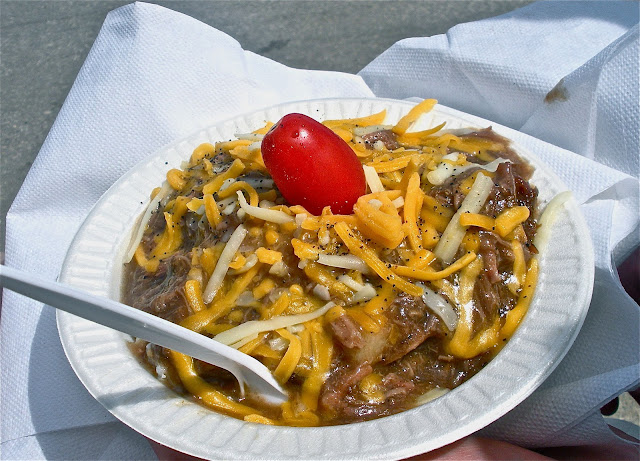 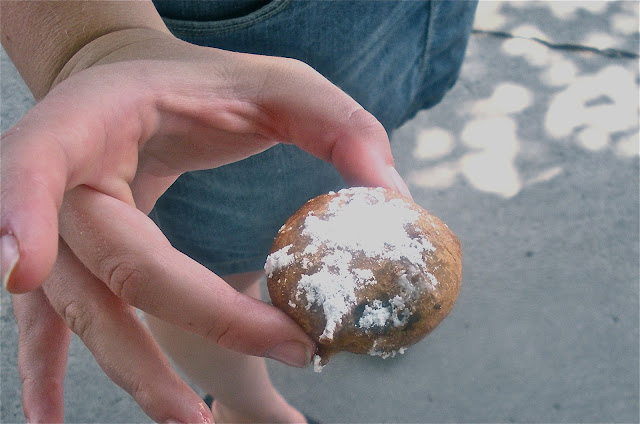 The six of us shared an order of deep fat fried Oreos. Deliciously Dangerous.  This was soon followed by a bite of a Fried Snickers Bar, which just shouldn’t be legal. 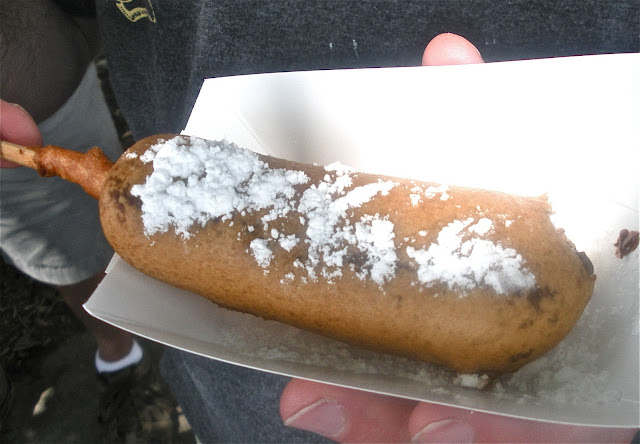 I also drank some wonderful root beer and took a bite of a double bacon corn dog.  The nice thing is that there were 6 of us, so we could all have just a taste of these dreadfully delightful treats. 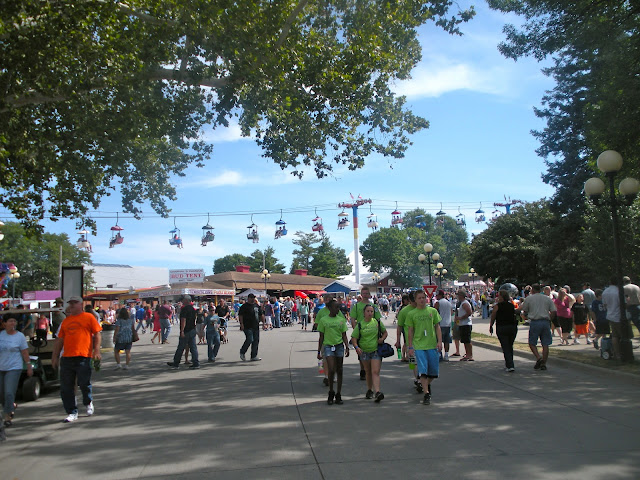 My first time at the Iowa State fair was great.  I got to see the famous ” Butter Cow” I touched a cow for the first time in my life.  ( They don’t usually have cows walking around in Chicagoland).  And I also watched people stomp on grapes ( to make wine).  All very neat and I can’t wait for next year!!

OKAY.  that was a long diversion.  Back to Chicken Salad on a Stick.

I added chicken to the ” Salad on a Stick” because when you add protein, it turns it into a meal, instead of a snack or a side dish. 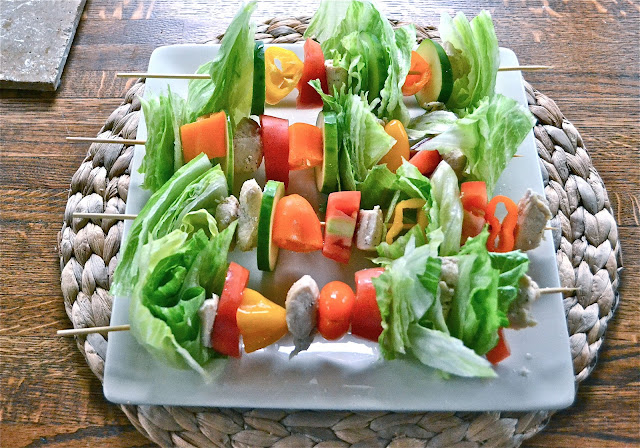 When I nannied during a summer in college, I watched a little boy who was a very picky eater.  I used to make his lunch into ” appetizers” by putting sandwich ingredients and fruits and veggies on skewers or toothpicks so they would be fun to eat.

I just love this concept because the presentation is beautiful and playful.  You should make a ” Salad on a Stick”  with your favorite salad recipe!